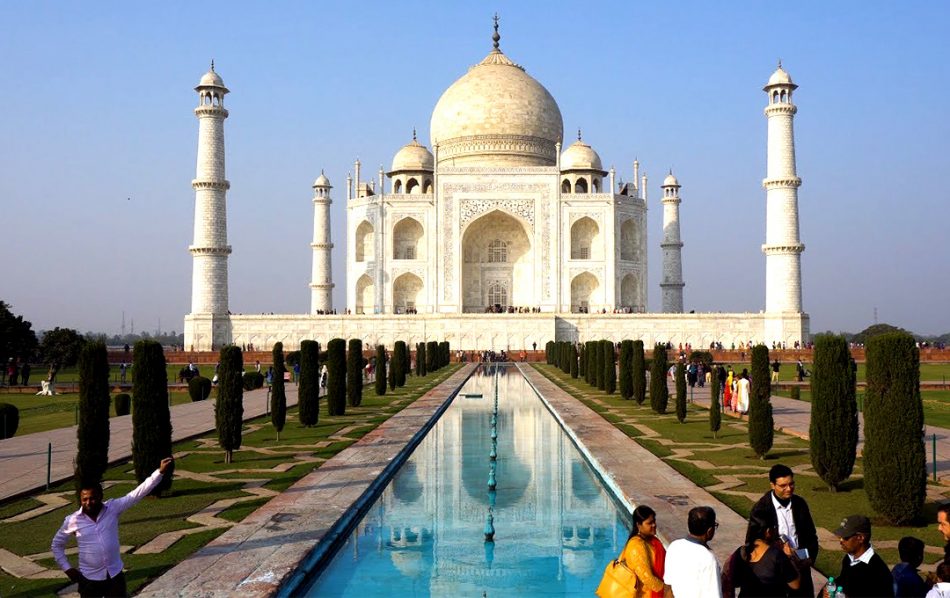 Taj Mahal, also spelled Tadj Mahall, mausoleum complex in Agra, which is an immense mausoleum of white marble; The Taj mahal in Agra is the jewel of Muslim art in India and one of the universally admired masterpieces of the world’s heritage. In its harmonious proportions and its fluid incorporation of decorative elements, the Taj Mahal is distinguished as the finest example of Mughal architecture, a blend of Indian, Persian, and Islamic styles. One of the most beautiful structural compositions in the world, the Taj Mahal is also one of the world’s most iconic monuments, visited by millions of tourists each year. The complex was designated a UNESCO World Heritage site in 1983. To read this article, follow us on the Eligasht Magazine.

The Taj Mahal has been able to pass through history without suffering any particular damage, which makes it possible to admire it nowadays as it was at its construction, for saying a short brief history the Taj Mahal was built by the Mughal emperor Shah Jahan immortalize his wife Mumtaz Maḥal (“Chosen One of the Palace”). The name Taj Mahal is a derivation of her name. She died in childbirth in 1631, after having been the emperor’s inseparable companion since their marriage in 1612. The plans for the complex have been attributed to various architects of the period, though the chief architect was probably Ustad Aḥmad Lahawrī, an Indian of Persian descent. The five principal elements of the complex main gateway, garden, mosque.

Jawab (literally “answer”; a building mirroring the mosque), and mausoleum (including its four minarets) were conceived and designed as a unified entity according to the tenets of Mughal building practice, which allowed no subsequent addition or alteration. Building commenced about 1632. More than 20,000 workers were employed from India, Persia, the Ottoman Empire, and Europe to complete the mausoleum itself by about 1638–39; the adjunct buildings were finished by 1643, and decoration work continued until at least 1647. In total, construction of the 4a2-acre (17-hectare) complex spanned 22 years.

Taj mahal is a symbol of love

Every morning the same moving spectacle repeats itself. At first, shy and then forcefully, the Sun’s rays illuminate the powerful monument built on the bank of the Yamunâ: The vague silhouette waiting in the gray calm of the night becomes again the glittering jewel of the Indo-Islamic architecture.
What must have been the emotion of Shah Jahan when he could celebrate the completion of the Taj Mahal! In the year of the death of his favorite wife, Mumtaz-i Mahal, the Mughal Emperor brought several thousand workers from the major centers of Eastern architecture, Lahore, Delhi, Shiraz and Samarkand to achieve this grandiose project. It is believed that the main builder was Imperial architect Ustad Ahmad Lahori. But the name of the true author of the project remains uncertain: Jahan, known for his artistic talents, was perhaps personally the spiritual father. With an extreme ambition, his project was as grandiose as it was expensive; no doubt he wanted to surpass all the marvels of the world of the time.
A Mughal mausoleum must preserve the memory of the deceased and constitute their place of eternal rest, the environment of the Taj Mahal was also designed with the necessary luxury. The wide alleys of the gardens, the immense portals, and the wide alleys reserved for the guests, suggest that the emperor and his court should surround the memory of Mumtaz-i Mahal.

The construction of Taj mahal in agra

The construction of the Taj Mahal took 22 years, from 1631 to 1653. The last 5 years were devoted to the erection of the gardens, the mausoleum and other buildings were finished. It is attributed to Ustad Ahmad Lahauri, but one does not really know the part he took in this work compared to other architects, because it is attested that there were several. The buildings were built in red sandstone, a very common stone in northern India. The mausoleum is also in sandstone, but covered with marble, hence its white color. In fact the builders played on the contrast between red and white, and on white they encrusted black marble for the inscriptions, making it a very successful set.

The construction was made with 20,000 men who alternated on the construction site. Given the mortality that can be imagined at the time, it means that some craftsmen have spent their entire professional career on this site. They were helped by 1000 elephants that were used to transport heavy loads. Of course, the workers used precise equipment, but the construction techniques were not really noticed, which means that today we do not have precise ideas on these methods of construction.

The Taj Mahal incorporates and expands on design traditions of Persian and earlier Mughal architecture. Specific inspiration came from successful Timurid and Mughal buildings including the Gur-e Amir (the tomb of Timur, progenitor of the Mughal dynasty, in Samarkand), Humayun’s Tomb, Itmad-Ud-Daulah’s Tomb (sometimes called the Baby Taj), and Shah Jahan’s own Jama Masjid in Delhi. While earlier Mughal buildings were primarily constructed of red sandstone, Shah Jahan promoted the use of white marble inlaid with semi-precious stones. Buildings under his patronage reached new levels of refinement.

The tomb is the central focus of the entire complex of the Taj Mahal. It is a large, white marble structure standing on a square plinth and consists of a symmetrical building with an iwan (an arch-shaped doorway) topped by a large dome and finial. Like most Mughal tombs, the basic elements are Persian in origin.

The base structure is a large multi-chambered cube with chamfered corners forming an unequal eight-sided structure that is approximately 55 metres (180 ft) on each of the four long sides. Each side of the iwan is framed with a huge pishtaq or vaulted archway with two similarly shaped arched balconies stacked on either side

The interior chamber of the Taj mahal in agra reaches far beyond traditional decorative elements. The inlay work is not pietra dura, but a lapidary of precious and semiprecious gemstones. The inner chamber is an octagon with the design allowing for entry from each face, although only the door facing the garden to the south is used. The interior walls are about 25 metres (82 ft) high and are topped by a “false” interior dome decorated with a sun motif. Eight pishtaq arches define the space at ground level and, as with the exterior, each lower pishtaq is crowned by a second pishtaq about midway up the wall.

Nowadays it is possible to visit the Taj mahal in agra, but it is a rather recent possibility since it was reserved for the Mughal emperors and their relatives from its construction to the fall of the Mughals. And to all those who were in charge of the maintenance of gardens, buildings. But in the modern era, after independence from India, the visit was organized.