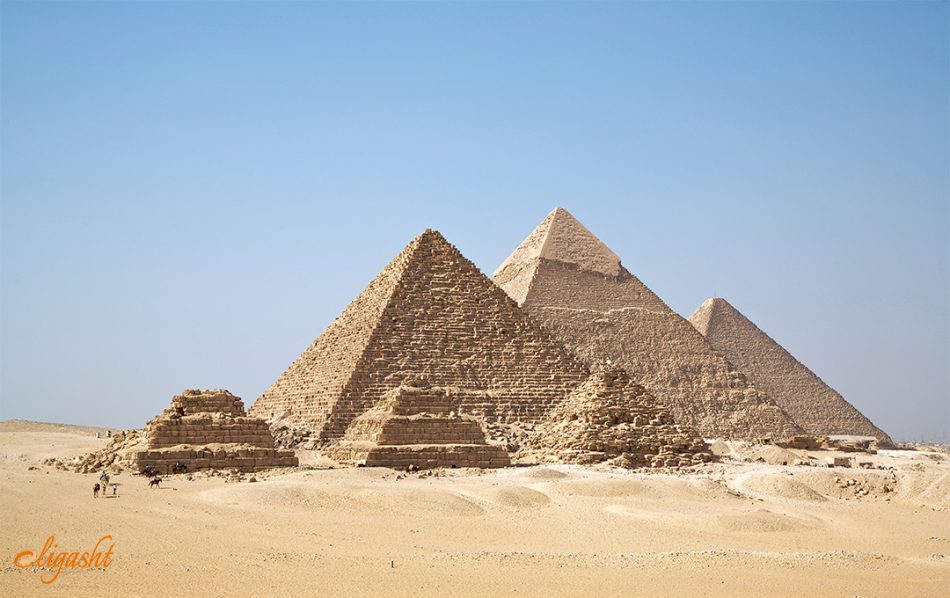 The oldest and yet the last surviving member of the Seven Wonders of the Ancient World, the Great Pyramid of Giza still stands tall in the desert, as it used to be all these thousands of years.

It is located among the many other ancient attractions, including two other pyramids and The Sphinx, which all are located in the Giza plateau, close to the Nile River and the capital of Egypt, Cairo.
In this article, we will take a look at this emblem of Ancient Egypt.
Stay tuned with us.

Located on the west bank of the Great Nile, Giza Plateau is home to the fabulous historical landmarks known worldwide. These ancient monuments include The Great Pyramid of Giza, a number of other gigantic pyramids and temples, and The Great Sphinx.

As the real gem in the West Dessert, you can easily identify the Great Pyramid of Giza the tallest and the most eye-catching Pyramid.
All these dazzling monuments, however, were built in a golden era of construction in ancient Egypt, during the Fourth Dynasty of the Old Kingdom of the realm.

The Pyramids of Giza

World-famous landmarks actually a burial monument of the dynasty’s great kings. It is said that they have been built to serve the purpose of transferring the deceased kings from his tomb to the heavens, as Egypt’s pharaohs expected to become gods in the afterlife.

On the other hand, the fact that the shape of pyramids represent the descending rays of the sun and all pyramids are located in the west bank of the Nile, where the sun sets, indicates the association of the pyramids to the mythological realm of the dead.

There are three main pyramids on the plateau. The Great Pyramid of Giza, Pyramid of Khefre, and Pyramid of Menkaure.

The Great Pyramid of Giza

Also known as the Pyramid of Khufu or the Pyramid of Cheops, this gigantic masterpiece of architecture is the oldest and largest of the three pyramids.
Located in the northernmost point of the plateau, the tomb of the Pharaoh Khufu is surrounded by three smaller pyramids of his wives.

With a height of 146.5 meters, this marvelous pyramid that has been built over a 20 years period of time, was the tallest man-made construction of the world for 3800 years. In order to construct such a colossal wonder, using the technology of ancient times, the manpower of 100,000 workers was needed, which actually is breathtaking.

Built by Pharaoh Khufu’s son, Pharaoh Khafre. Although this pyramid which is located in the middle of the two other pyramids, appears to be larger than the Khufu’s (because of its more elevated location, and the steeper angle of inclination of its construction), the Khufu Pyramid is bigger both in height and volume.
The complex of the Pyramid of Khefre includes the famous Sphinx monument as well as some other buildings.

The southernmost and third of the Giza Pyramids which is considered as the smallest one and is built by Pharaoh Menkaure.
There is a vertical gash in its north face of this 65 meters-high pyramid whose history goes back to the twelfth century. When a king called Al-Malek Al-Aziz Othman Ben Yusuf tried to destroy the pyramids, starting with Pyramid of Menkaure. After months of struggle, his men left the pyramids while they were not able to destroy the pyramid and only damages done by them is that gash.

The extraordinary while mysterious limestone monument is situated on the Giza Plateau adjacent to the Great Pyramids of Giza. Shaped as the mythical creature, the Sphinx is one of the most famous statues of the world.

With the face of a human and the body of a lion, these creatures have roots in both Greek and Egyptian cultures. In both mythologies, Sphinx was known as guardians, just as the Sphinx of Giza, whose mission is to be the guardian of the pyramids.

Although the name given to the statue is unknown, it is said that its face depicts Pharaoh Khefreh’s.

It is said that people all over ancient Egypt helped the complex to be built, as it became a national project to display the power of then majestic civilization.

The ancient architecture used in monuments, and especially the Great Pyramid of Giza were so magnificent that even now there are doubts about the way they were built.