Peterhof Palace in St Petersburg, the Versailles of Russia 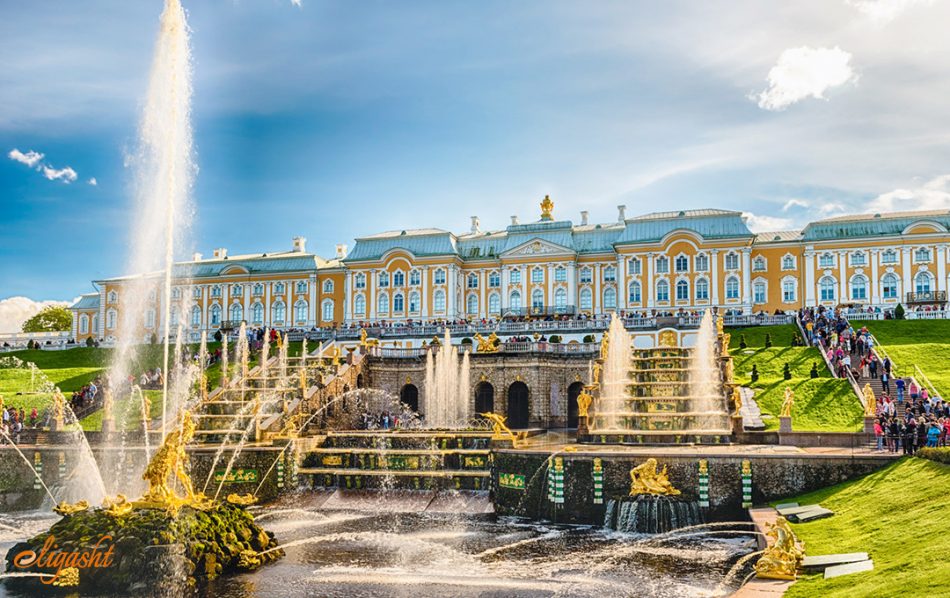 Russia is one of the most adorable countries in the world. A vast land full of beauty. There are a variety of fabulous attractions all around it that can make any visitor fall in love. These attractions include impressive landmarks such as Kremlin and Saint Basil’s Cathedral in Moscow, Hermitage Museum and Peterhof Palace in St Petersburg and many more across the glittering land of Russia.

One of the most amazing landmarks that you need to pay a visit while in Russia, is the majestic Peterhof Palace in St Petersburg. This impressive attraction is a beautiful series of gardens and palaces that are located just out of the colorful city of white nights.

Peterhof Palace is which is built by the famous Russian Tsar, Peter the Great in the 17th century.  The style of architecture used to construct this magnificent landmark is so unique and admirable that it is known among the people as the Versailles of Russia. Located in the Gulf of Finland, the view it grants is something you can never find anything even close to it anywhere else in entire Europe.

In this article, we will introduce the impressive Peterhof Palace in St Petersburg. With the information provided here, you will know why it is one of the must-see landmarks in your Russian travel. This article also provides some useful information, so that you can have a better approach while visiting this majestic souvenir of Russian Tsar, Peter the Great.

Apart from its amazing location and its fabulous design, Peterhof Palace in St Petersburg is famous for its historic background. The story behind the reason why it is constructed is one of the most amazing historical stories.

Not long after Louis XIV of France built the wonder of architecture, the Palace of Versailles in Paris, Peter the Great, Tsar of Russia paid a visit to France. During that visit, he saw the magnificent Versailles. There he decided to construct this majestic palace as a direct response to the masterpiece built by Louis XIV in Paris.

The Russian Versailles was actually built a decade before the visit of Tsar, as a country habitation. Some years later and in order to make it a proper response, using the art of some famous designers such as Domenico Trezzini, Jean Baptiste Alexandre Le Blond, Andre Le Notre and Francesco Bartolomeo Rastrelli, the palace, its gardens and a later expansion for Queen Elizabeth of Russia was completed.

The palace was built in a strategic location that made it an important place for Russia and its Tsars. It even had a bold role during WWII and the battles between the Soviet Union and Germany.

During the Second World War, Peterhof Palace was one of the most important casualties. It was deeply damaged by both Germans and the Soviet Union bombings. The palace was reconstructed afterward and what you see now is the result of that huge effort put to recreate this majestic landmark of the country.

When to visit Peterhof Palace

As the magnificent Palace of Peterhof is just 30 Kilometers far from St. Petersburg, the weather is just the way it is in the city. The weather, as a key factor is something you should not forget to consider while planning your visit.

With the temperature at its best, the best time to visit is undoubtedly from the middle of June to the end of September. Pleasant weather is something important in Russia.

Of course, the weather is not the only option to consider. Summer is an expensive period in St. Petersburg and if you are trying to plan a visit on a budget, it is better to avoid that time.

Of course, a better option is visiting in mild days of fall and spring where the prices are considerably cheaper than summer and the weather is more pleasant than winter.

You also can plan your visit somehow that there is the opportunity to see and participate in the celebrations and festivals of St. Petersburg. The atmosphere in the city during those days is something you will regret missing.

How to visit Peterhof Palace in St Petersburg

With a distance of just 30 kilometers from the beautiful St. Petersburg, probably the best way to visit Peterhof Palace is to use the city as a base and book your accommodation in there. From St. Petersburg you can simply pay a visit to the palace and spend a fabulous one day trip in there. This way you can be sure that you will have an ideal visit.

St. Petersburg is a fabulous city that is well connected to almost any city in Europe and even outside the borders of this continent. You can book a flight ticket to the city from your closest airport to the airport of St. Petersburg and arrive at your hotel that is actually just half an hour away from the majestic landmark, Peterhof Palace.

There is also a remarkable variety of accommodation options in St. Petersburg. With this wide range of hotel rooms, you do not need to worry about where you are going to spend your Russian journey. Whether you are planning a luxury stay in high-level hotels, or it is a trip on a budget you are going to go on, there are plenty of options for you in the Venice of the North.

In order to make your booking process an easier one, Eligasht has provided both a hotel room booking system and a flight ticket booking system. With these easy to use systems, you can be sure of a hassle-free booking process. A wide range of flights and hotel rooms are available to be compared to each other and be chosen. This way, booking a flight ticket to St. Petersburg or booking a hotel room in St. Petersburg is easier than ever.