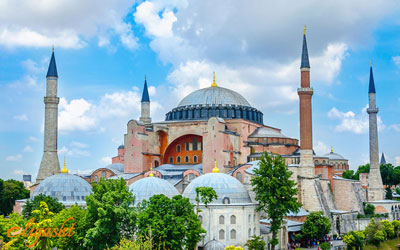 Hagia Sophia or aya sofya is the former Orthodox Christian patriarchal cathedral, later an Ottoman imperial mosque and now a museum in Istanbul, Turkey. This magnificent building, built in 537 AD at the beginning of the middle Ages, was the world’s largest building and an engineering marvel of its time. It is considered the epitome of Byzantine architecture and is said to have “changed the history of architecture”.

There are many important monuments in İstanbul, but this venerable structure – which was commissioned by the great Byzantine emperor Justinian, consecrated as a church in 537, converted to a mosque by Mehmet the Conqueror in 1453 and declared a museum by Atatürk in 1935 – surpasses the rest due to its innovative architectural form, rich history, religious importance and extraordinary beauty.

Inside the Haghia Sophia

As you enter the building and walk into the inner narthex, look up to see a brilliant mosaic of Christ as Pantocrator (Ruler of All) above the third and largest door. Through this is the building’s main space, famous for its dome, huge nave and gold mosaics.

The focal point at this level is the apse, with its magnificent 9th-century mosaic of the Virgin and Christ Child. The mosaics above the apse once depicted the archangels Gabriel and Michael; today only fragments remain. The Byzantine emperors were crowned while seated on a throne placed within the omphalion, the section of inlaid marble in the main floor.

Ottoman additions to the building include a mimber (pulpit) and mihrab (prayer niche indicating the direction of Mecca); large 19th-century medallions inscribed with gilt Arabic letters; a curious elevated kiosk known as the hünkar mahfili; and an ornate library behind the omphalion.

Looking up towards the northeast (to your left if you are facing the apse), you should be able to see three mosaics at the base of the northern tympanum (semicircle) beneath the dome, although they have recently been obscured by a scaffolding tower used in restoration works. These are 9th-century portraits of St Ignatius the Younger, St John Chrysostom and St Ignatius Theodorus of Antioch. To their right, on one of the pendentives (concave triangular segments below the dome), is a 14th-century mosaic of the face of a seraph (six-winged angel charged with the caretaking of God’s throne).

In the side aisle at the bottom of the ramp to the upstairs galleries is a column with a worn copper facing pierced by a hole. According to legend, the pillar, known as the Weeping Column, was blessed by St Gregory the Miracle Worker and putting one’s finger into the hole is said to lead to ailments being healed if the finger emerges moist.

To access the galleries, walk up the switchback ramp at the northern end of the inner narthex. In the south gallery (straight ahead and then left through the 6th-century marble door) are the remnants of a magnificent Deesis (Last Judgement). This 13th-century mosaic depicts Christ with the Virgin Mary on his right and John the Baptist on his left.

Further on, at the eastern (apse) end of the gallery, an 11th-century mosaic depicts Christ Enthroned with Empress Zoe and Constantine IX Monomachos.

To the right of Zoe and Constantine is a 12th-century mosaic depicting The Virgin Mary, Emperor John Comnenus II and Empress Eirene. The emperor, who was known as ‘John the Good’, is on the Virgin’s left and the empress, who was known for her charitable works, is to her right. Their son Alexius, who died soon after the portrait was made, is depicted next to Eirene.