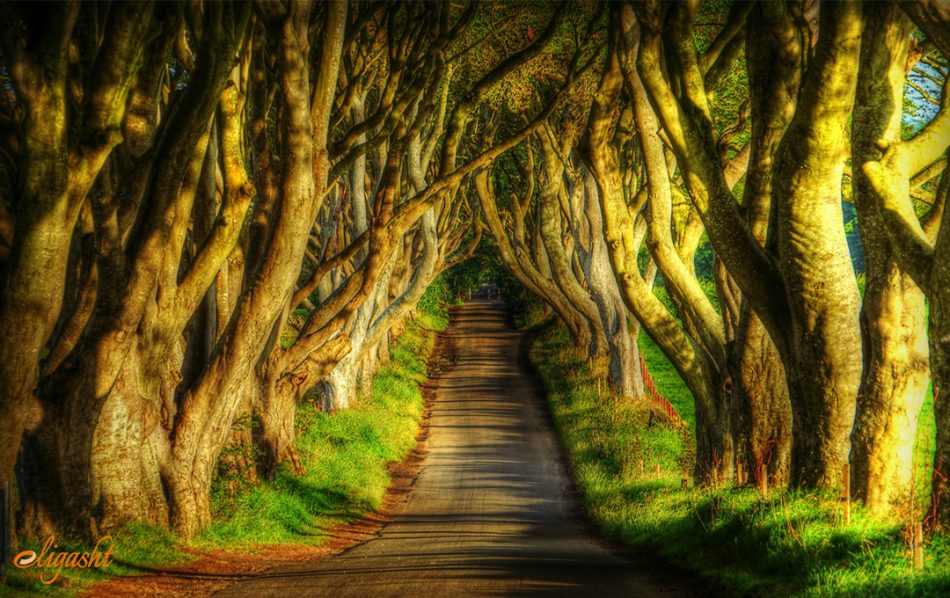 As one of the most popular fantasy worlds, every fan of the famous TV show, Game of Thrones is dreaming of paying a visit to the Westeros. The HBO series has become the favorite one for millions of people and nowadays you can rarely find someone who has not heard of it. If you are willing to experience the atmosphere in which the series was made, the GOT locations in Ireland are definitely a must-see.

There are 25 different locations in Northern Ireland in which the series were made. In this article, we will take a look at some of the most famous GOT locations in Ireland.

In series, this location was used for several scenes of season one. All of the happened north of Winterfell. The most important scene was when Ned Stark and his companions found the orphaned Direwolf cubs near Winterfell.

The forest itself is one of the most beautiful state parks in Northern Ireland.

Located in the very north of Northern Ireland, the downhill Beach is part of a seven-mile stretch of lovely sands. It is popular among the fans of water sports as well as the ones who are fond of scenic walks.

This lovely beach hosted the filming of one of the most important Dragonstone scenes. Melisandre, the Red Priestess burned the old seven gods of Westeros in this location.

This strand was where we have seen the Stannis Baratheon and Ser Davos Seaworth for the first time in the series.

Definitely one of the most picturesque areas in the country, the Dark Hedges is one of the most famous GOT locations in Ireland in the real world. Tourists from all around the world come to visit this beautiful path just to take photos in it.

This amazing road has been used as the northern King’s Road, closer to the Winterfell and further to the King’s Landing. You will absolutely remember this road during Ned Stark’s journey south to the capital.

This small city which is located in the Antrim Coast and Glen’s coastline was used several times as the Free Cities.

Its small fishing harbor featured as the Lordsport Harbor in the second season of the show, where Theon Greyjoy was returning home to the Iron Islands.

The breathtaking natural beauty of this area is what everyone should pay a visit to. The green hills combined with the amazing weather makes it a pleasant landscape.

As one of the GOT locations in Ireland, Sallagh Braes which is a part of the Glens of Antrim in the real world, was pictured in season 6.

This is the place where Brienne of Tarth fought to Sandor Clegane, the Hound, and lost the battle. Arya Stark met the wounded Hound who survived after a fatal battle in the same place and left him behind to die.

The amazing plateau and steep cliffs are extended for more than six miles across the Magilligan Peninsula. It looks like a magnificent ocean in green.
The Binevenagh was used during season five, as the Dothraki Green Grass Sea. After Daenerys Targaryen was attacked by the Sons of the Harpy in the Meereen fighting pits, she was rescued by her dragon, Drogon, and taken to this place.
This beautiful scene is where the Dothraki army faced Khaleesi afterward.

One of the finest beaches in the country located on the North Coast. Atop the cliffs, you may find Mussenden Temple as well as mesmerizing views of Inishowen headland.

As one of the GOT locations in Ireland, this strand has portrayed the coast of Dorne during season five. This is where Jaime Lannister and Ser Bronn of Blackwater arrived in their mission to bring prince Myrcella back to the King’s Landing.

The whole story of the series started here, a lot of the most important parts of it happened here, and it will probably have a vital role in the series final season. It is the iconic Winterfell, the home to the famous house Stark, and the capital of the Kingdom in the North.

Castle Ward which is located in County Down, is a 16th-century castle, belonging to the Ward family. It is an impressive architectural wonder itself, surrounded by a beautiful walled demesne with gardens and woodland.

As a tourist, this is one of the best GOT locations in Ireland you should pay a visit to. As there some of the former actors and crew of the series who are working in the Castel Ward now. You can spend some time with them and hear their amazing stories about working in the Game of Thrones, its actors, and its atmosphere.

You also have the opportunity to try on the original costumes of the series, and take photos with them. There is also an archery set that you can learn and practice archery, right where Stark boys were practicing, with their actual archery set.

One of the most awesome activities in Castle Ward is watching the Behind the scenes videos that are uniquely belonging to this film set only.

Located in Antrim, at the outflow of the Glendun and Glencorp valleys and at the mouth of the River Dun, these beautiful caves were the filming set of one of the most horrifying scenes of the whole series.

These are the caves in Stormlands where Melisandre gave birth to the shadow evil creature who later murdered King Renly Baratheon.