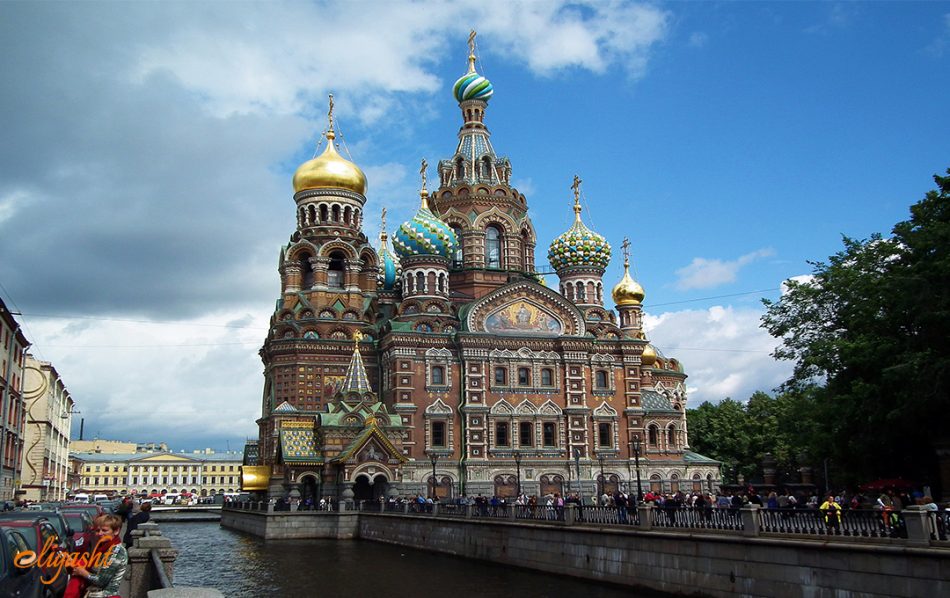 The Savior on the Spilled Blood

The dazzling symbol of Russian megacity, the fabulous Saint Petersburg, is a truly wonderful attraction that calls every visitor upon itself to show how amazing it is. With its lively colored domes and charming architecture, the church of the Savior on the Spilled Blood really stands out from the other buildings of the city.

There is a great story behind this Orthodox church which is also known as the Cathedral of the Resurrection of Christ. An important part of Russian history occurred in the exact place that the church is located.

The Savior on the Spilled Blood is an impressive example of medieval Russian architecture just in the atmosphere of some other romantic nationalist landmarks like Saint Basil Cathedral of Moscow. The wonder will not stop just in the exterior of the building as with a mesmerizing work of mosaic inside every visitor will be charmed with the beauty.

As one of the most visited attractions of Russia, you may want to have this spectacular landmark in your bucket list. As sometimes with a lack of information or poor planning you may face a different experience you should have some ideas about its history, as well as some information about when to visit it and how to do that.

In this article, we will provide some information about the impressive church of the Savior on the Spilled Blood. With the tips and helps discussed here, you may have a better approach to this brilliant masterpiece of art and architecture.

The cathedral marks a historic event itself. On March 13, 1881, one of the most powerful Tsars of Russia, Tsar Alexander II was targeted by an anarchist throwing grenade inside the Tsar’s carriage while he was passing along a canal.

The attacker himself was killed by the explosion and Tsar was lethally wounded. Tsar was taken to his winter palace located in the Saint Petersburg city. Just some hours later he passed away in there.

It has been decided to construct a memorial for the Tsar in the exact place where the attack has taken place. In order to do that first, a temporary shrine has been built and the construction of a more magnificent building has been started 2 years later, in 1883. The canal was narrowed and some other modification has been done to the location so that it can fit and completely surround all the parts of the location.

To create a cathedral majestic enough to be suitable for the event it resembles, some of the most famous architects of the time such as Alfred Alexandrovich Parland. Parland had already worked on some notable landmarks such as the Coastal Monastery of St. Serguis and many more.

After a period of 24 years of work, the job was finally done in 1907. The result was something extraordinarily impressive. The awe-inspiring masterpiece of the city has seen many events since then.

It was looted and damaged during the Russian Revolution of 1917, closed by the Soviet Union in 1932, significantly damaged during the German invasion in the Second World War, and all that is just a part of the history of this fabulous cathedral.

With some impressive restoration that took as long as 27 years, the Cathedral of the Resurrection of Christ still stands tall and majestic in the heart of the Russian city of Saint Petersburg, making everyone fall in love with this brilliant pearl of the city.

Although there is a slight difference between the weather in Saint Petersburg and Moscow, the city is still in Russia and you cannot expect anything but cold and snow during fall and winter. Although the crowd will be significantly lower than the summer and spring.

The cathedral is amazingly picturesque both with snow and without it, so the best time to visit it just depends on you. Whether you want to visit it in the warmth of summer or in the cold of winter. Do you prefer your image of the church with snow or with the green color of the spring?

The cathedral is really easy to find. Even if you are far away from it you can notice its domes that are as high as 81 meters.

Visiting the cathedral requires owning a ticket. There are two ways to buy the ticket, taking it from the ticket offices of the church, or booking it in advance, online.  As during the high season there will be a long queue around the box offices, the latter option is what we suggest.

The ticket cost is not so different from other attractions you may have visited before. The price is 250 rubles for adults, 50 rubles for youngsters between 7 and 18, and free for children under 7 years old.