3 years ago written by Siyavash Heidari 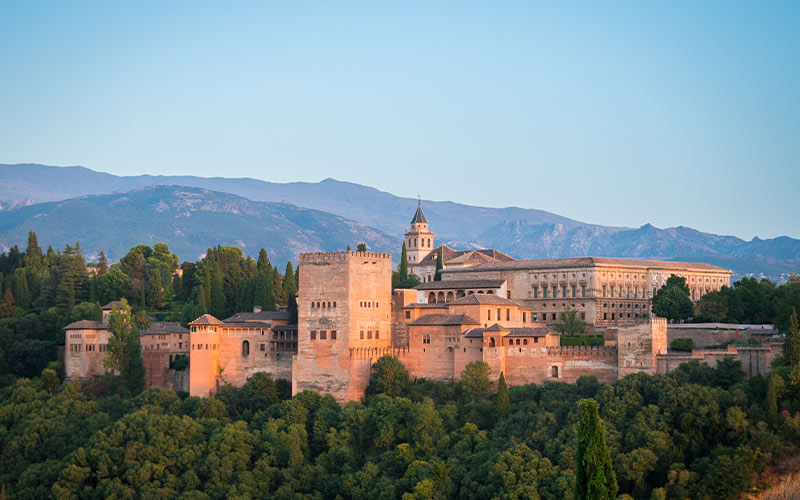 The fabulous Red Castle of Granada is one of the symbols of not only the historic country of Spain but also the Iberian Peninsula. Magnificent as a castle that comes straight out of fairy tales, this fabulous masterpiece of art and architecture is still awe-inspiring although it has been more than 6 centuries since it was constructed. Even the wars it has seen, the huge vandalism effect through the years, and careless restoration could not reduce its magnificence. It is such a vast and impressive complex that it is not easy to talk about it all in just one article as the Alhambra travel guide. Everyone should pay a visit to it as it deserves to be among the top attractions of the world.

When you first see this amazing palace you will find out that the best description about it is the way Moorish poets have done. They called it “a pearl set in emeralds”, and this is the best way someone could describe it.

The complete name of this amazing palace is “al-Qal’at al-Hamra”, an obviously Arabic name that shows who has built this pearl of the Iberia. The meaning of the name is the red fortress, while the Alhambra simply means ‘The Red One”.

The Alhambra was done constructing at the end of the Muslim rule of Spain and can completely reflect the beauty and magnificence of Islamic culture, especially the branch of Muslims ruling the Andalus.

In this article and as it is supposed to be the Alhambra travel guide, we will introduce the complex and provide some tips about visiting it.

The history of Alhambra

The majestic palace of Alhambra was built on the ruins of a small Roman fortification which dated back to the 9th century. This small, unimportant Roman castle then turned into one of the most amazing architectural wonders of Europe.

In the 13th century one of the Nasrid emirs of Al Andalus, Mohammed ben Al-Ahmar who was the ruler of Emirate of Granada decided to build a palace in the place of the ruins, so the job of renovating and rebuilding the fort has begun. The palace soon has been converted to the royal palace of the region by the Sultan of Granada, Yusuf I. It was the same until the ruling of the Arabs has come to an end.

No one could rule out a wonderful palace like the Alhambra, so very soon it has become the Royal Court of Ferdinand and Isabella, the king and queen whose marriage created the unified Kingdom of Spain. Since then the Alhambra has been present in some important points of history. As an example, It is the exact place where the famous Christopher Columbus received his famous royal endorsement to begin his expedition. No need to mention that he ended up discovering the Americas in that very expedition.

The palace has seen some changes during different parts of history, like the one during the reign of the Holy Roman Empire. During the 16th century, there was a project commissioned by the Holy Roman Emperors to build a more Holy Roman-style palace instead of this Nasrid construction. Fortunately, the project has never been completed.

Now it is a long time since when the first bricks of this impressive palace were put, and it still stands tall, magnificent, and adorable. It is a unique example of its own kind of architectural style, as well as a shred of old evidence to the culture it has come from.

When to visit Alhambra

In order to have a pleasant visit to this fabulous wonder, this part of The Alhambra travel guide provides some information about the best time you can plan your trip.

As a vast attraction, you should have plenty of time visiting it and two factors can affect this experience of yours: the crowd and the weather. In order to visit the attraction in pleasant weather, away from the infamous summer heat of the region you should rule out the summer.

Although spring is the best time to visit this iconic attraction due to the beautiful flowers of gardens coloring the palace create breathtaking scenery, the crowd is what you should consider. You either have to get along with it or change your time of travel.

Fall and winter are the seasons you can have a visit with a lesser crowd and of course better weather, especially the December that is the best month considering these two factors.

How to visit Alhambra

With a ticket of only 14 Euros, you can simply have access to the three regions of Alcazaba, Nasrid Palaces, and beautiful Generalife gardens.

Please note that if you have booked your tickets online, you need to bring a printed version of it with you to the site. One important point we are going to mention in the Alhambra travel guide is about time. You need to be extra careful not to arrive late.