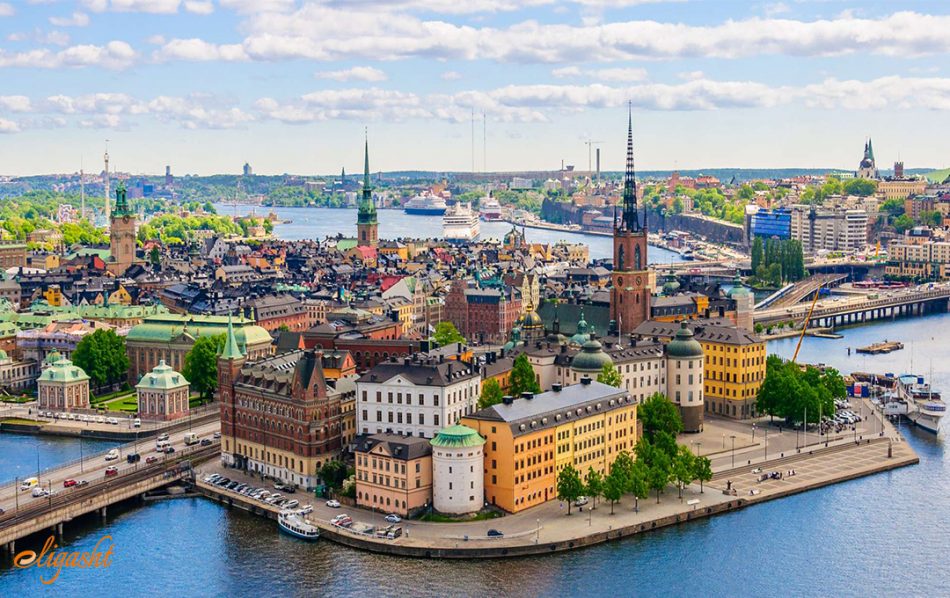 With a history that begins in the stone ages, the amazing Stockholm is brilliant in every aspect possible. As it is being called by its citizens, “the beauty on water” has so many wonderful experiences waiting for the visitors that reading a travel guide to Stockholm is necessary for all those who are planning to visit it.

The so-called Venice of the North, which is the most populous city of the Nordic countries, is the famous host of annual Nobel Prize ceremonies, but it is not the only reason why it is a favorite destination for the tourists. In this article, we will take a brief look at the beautiful capital of Sweden and provide a thorough travel guide to Stockholm.

With an average temperature of 22°C, July is the warmest month of the year, while February, which has an average of only -5°C is the coldest one.

As a tourist, the best time to organize your trips to Stockholm is summer and fall, as the days are longer, warmer, and of course sunnier. From June through October there is the tourist season with numerous tourists coming from all over the world.

On the other hand, winter and spring is fabulous in another way. If you are in love with the nightlife or want to have a stay with more taste of local life, winter is the best choice. Nights are longer, and of course colder, and due to this fact there is not so many tourists in the city.
Some days of the winter there are only six hours of daylight, as well as wonderful snow coming own on the ground. For a lover of snowy nights, these scenes are wonderful.
The summit of this travel guide to Stockholm lies here. Some of the Stockholm’s nights during the winter are gifted with the breathtaking aurora borealis as well.

As an amazing city, the capital of Sweden has many things to offer. In this part of our travel guide to Stockholm, we will have a glance at some of the best things to do during your stay.

One of the best ways to have a nice tour around the city is by walking around it. Start from Kungstradgarden Park, past the fabulous Grand Hotel on the waterfront and along Sodra Blasieholmskajen, straight to the waterfront by the famous National Museum. Then keep on your tour by crossing the bridge to Skeppsholmen, a small island which is one the fourteen islands Stockholm stretches across and offers an impressive panoramic view over the harbor by just walking around it.

There are also Moderna Museet and the Museum of Far Eastern Antiquities on your way which are amazing museums to pay a visit.

It can be a fantastic way to experience the built-on-island city of Stockholm to have a trip by the local ferries. You will have a unique view of the Stockholm, as well as the chance to experience the ferry ride on the blue waters surrounding the city, and in the end, a fabulous destination waiting for you.

There are ferry departures from Nyobriviken and Slussen which take the passengers to the amazing island of Djurgården and Hammarby Sjöstad.

There is a dazzling strip of shops on Nytrgsgatan Street. A variety of stores such as shoe stores clothes shops, as well as cafes, confectionaries, and restaurants.

You can take some time and window shop around the street, get some nice drinks, and enjoy the fabulous atmosphere running through the so-called SoFo.

What attractions to visit?

The most populous city of Scandinavia is a real cultural metropolis. The various museum, as well as numerous cultural events every day, makes it an ideal destination for every tourist who is fond of art and culture.

In this part of the travel guide to Stockholm, we will introduce some of the most famous sights and attractions to visit while in the city.

It can be considered easily as an open space, entrance free museum in the heart of Stockholm. Dated from the very first days when the city was founded, there is a history of 8 centuries for this region.
Every corner of the Gamla Stan is filled with must-see sights, attractions, restaurants, and cafes. It is the best place to experience the city’s culture during your northern explorations. This neighborhood is home to the Stockholm Cathedral, the Royal Palace, and the Nobel Museum.
If you are also looking for a souvenir to take back home, you will certainly find some interesting ones here in the old town of Stockholm.

The Impressive Vasa battleship was supposed to be a brilliant addition to the Swedish Imperial fleet back in the early 16th century. Unfortunately, it sank in 1628, while it was on its maiden voyage.

Centuries later a salvage operation took place in 1961. Now the battleship turned into a fabulous museum, 95 percent of which is entirely original.

With more than one million visitors per year, the Vasa Museum is the most visited museum in Sweden, which seems is absolutely righteous to be.

If you are planning a visit for the Royal Palace of Stockholm, plan at least one day. The official residence of the King of Sweden is located by the water’s edge of Gamla Stan.

Home to more than 600 rooms and several museums inside, this 18th-century wonder of mighty Swedish Empire is named among the largest and most beautiful palaces in the whole world.

The palace hosts some amazing attractions including the silver throne of Queen Kristina, the Museum of Antiquities, the Royal Armory, the Three Crowns Museum, and Royal Treasury.

Among the amazing things to see during your visit is the daily changing of the palace guard.

An interesting fact is that the Queen’s residence is a 45-minute ferry ride further from here. The official residence of the Queen of Sweden is in Queen’s island (Drottningholm).