A complete travel guide to the Great Wall of China 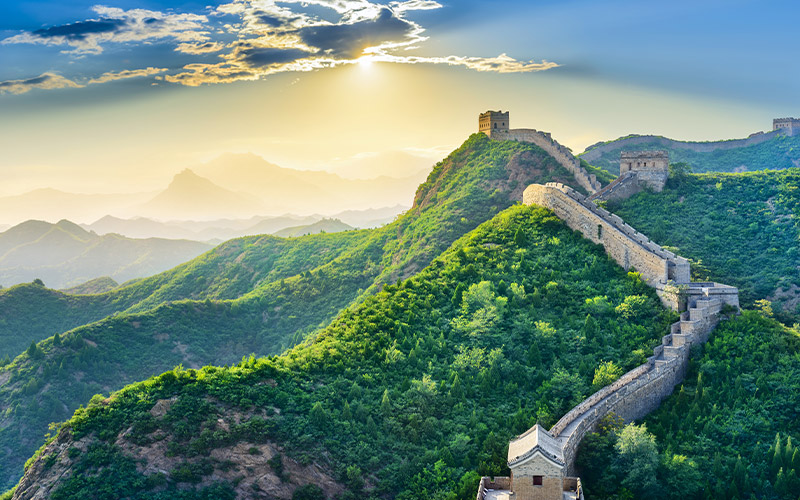 The most famous construction built by human beings on Earth is so enormous that for a long time was believed to be the only work of man visible from the moon. Although this statement was proved to be wrong, the Great Wall of China is a magnificent attraction, truly righteous to be called a wonder.

It winds up and down for thousands of kilometers from east to the west, stretching across mountains, deserts, and grasslands, just like an ancient restless magnificent dragon. The name which it is called by in China, Chang cheng (the long wall), provides a precise definition of what we are talking about. The entire wall with all of its branches was found to be 21,196 km.

The Great Wall was built to prevent the northern invaders to enter great China’s lands, and to be honest, it has served well through all these years.

Although the wall we see today is mostly built by the Ming Empire, during the 14th century, but the impressive wall is far older than 600 years. The construction of the wall began during the Qin dynasty in China, about 2500 years ago.

A lot of different parts of the wall are now disappeared or ruined, but the remaining part still is one of the most amazing attractions in the world. Few of us never dreamed of visiting it.

In this article, we will have a brief look at the impressive Great Wall of China, and provide a complete travel guide to visit this brilliant attraction.

Due to the more pleasant weather and of course the perfect view created by the colors of leaves, October and November are the best time to visit the Great Wall of China. If you can tolerate the difficulty of terribly cold weather, you will be rewarded with the brilliant scene of the snow on the wall, which is unbelievably wonderful.

If we put the weather condition aside, one of the most important factors to consider when to go, is holidays. Try your best to avoid visiting during weekends as it gets so crowded that you cannot enjoy your visit.

The famous Chinese New Year, which is being celebrated during February is exactly the month you should not plan your visit at all. It is that time of the year that the wall is visited by so many people and there is not even enough space to walk.

As it is obvious, a visitor cannot visit all of the Great Wall of China, and on the other hand, there are several locations on it to pay a visit which may not be the ideal ones.

In order to solve the problem, we will have a closer look at the most famous sections of the wall, so that you can choose the best spots for your visit to the wall.

The most popular section to visit the wall which is the best-preserved and most complete section of it. Its 70 kilometers distance made it one of the most accessible sections from the capital, Beijing by public transport.

One of the best advantages of Badaling sections which made it popular among visitors is its stairs which are equipped with handrails. The stairs are not very steep, so it is relatively easy to climb. The section is also has a cable car which is a great help to climb while offering a brilliant view.

If you are willing to escape from the crowds gathered in the Badaling section, Mutianyu is the right choice as it is similar to Badaling in many ways. The distance is about the same, as well as the accessibility and the condition of the wall, although you can enjoy an impressive landscape in Mutianyu which is uniquely amazing.

This section is equipped with a cable car as well so that the children and seniors can have their visit here. This 5.4 kilometer-long section is often less crowded than the Badaling section, so maybe it is better to plan a visit here instead.

Mutianyu Section is surrounded by beautiful natural scenery. Depending on the time of the year you are visiting it, you can enjoy fabulous blooms or the colorful leaves all around it.

Historically used as the northern gateway to Beijing with its strategic mountainous terrain, this section is unique as it is the only lakeside Great Wall section. This gives visitors the opportunity to take a boat and visit the Great Wall of China from the other side. The atmosphere is so nice that you will probably take some time hiking around the section as well.

Although the beauty mentioned before, this section is not so crowded and you will hardly see any tourists in this section.

This section has never been reconstructed, so you can have the experience of visiting a totally original section of the wall, which is fabulous. These amazing ruins of the wall and watchtowers have stood strong against invasions during numerous battles fought here.

Gubeikou’s original name was Beikou, which means Northern Pass, and it was the strategic northern defensive line of the city of Youzhou, which is today’s Beijing.

This section is the ideal location for adventure hikers who are fond of challenging hikes, and photographers who are looking for amazing natural views along with the brilliant ancient Great Wall of China.